For awhile now I’ve been wanting a way to display some of my minifigures but at the same time keep them from getting dusty. My current Lego storage method consists mostly of sets stored in Ziploc bags and it’s not the most crush proof method for the figures when the bags are all piled together – I’ll detail my full Lego storage in a later post. I believe I first came across this pretty incredible looking display. Then, I started to read about using the Ribba frame all over the internet, it works because of its depth. I ended up using this post from Ikea Hackers for reference. (Ikea Hackers is a pretty neat website for all of your non-Lego furniture and decorative needs as well)
For a long time I’d wanted to make the entire case itself out of Lego, using large clear windows for all of the figures, but that is a very costly proposition. The 1x6x5 clear wall element that would be best for this is 90 cents per piece from Pick a Brick – meaning the cost of the display would be about a dollar per figure (if you made the back a different color). So I finally got around to going to Ikea in Stoughton, MA, which is not exactly close. I then bought a large gray baseplate – the reason for going to the Lego store – I was too impatient to wait for one from Amazon – where they cost a dollar less. As you can see from the Ikea Hackers link, you can wedge plates into the baseplate – I was very keen not to be gluing any Lego – the Kragle! The only adhesive I had to use was scotch tape – which has surprisingly held for the last 5 days or so. For a background beyond the baseplate I just left the matte in the frame. To center it I used a ruler to make small guide marks – on the back of the matte, so I could use it for a picture some day if I wanted to. When I couldn’t see the marks any more, it was close enough to centered for me. You want the baseplate to be 6 cm from all sides. I may cover it with black paper to give it a more sleek look, but white is fine for now. In the end, I was very impressed with the results – especially compared to how little effort it took (other than driving to Ikea). You can get the frames online from their website – and they also come in white. So – check it out: 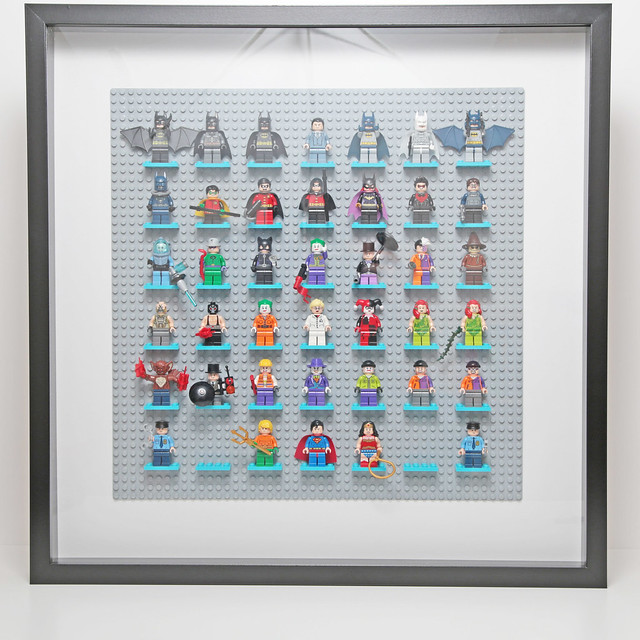 The flash reflection on the top of the glass doesn’t do it justice – but in person it is truly breathtaking. Now the only problem is if I want to play with a figure – they’re not exactly at arms length. If you want to zoom in to see the figures in all their glory just click on the photo to visit Flickr.