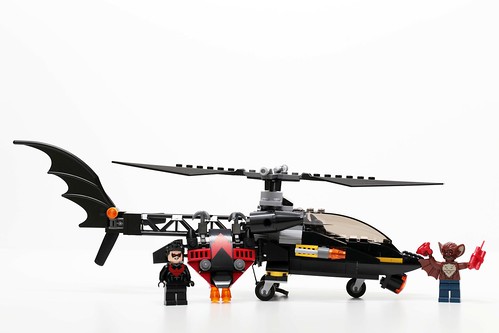 Who’s this Man-Bat fellow? I’ve not heard of him before – is he part man, part bat? Kind of like Batman? Or is he the Bizarro of Batman comics. Maybe I’ll google it someday, but based on how boring this set is, including his minifigure, I don’t think it’s worth it for this review. This is your usual $20 set except it is really only worth getting for the Nightwing figure. The Batman is the same as always and unsurprisingly for this newest wave of Batman sets with Bat vehicles, the helicopter is incredibly boring. First of all, there are only two rotors. Yes I know it’s possible to have a two-rotor helicopter, but Bruce Wayne can afford at least four rotors. This is way more boring than the Bat jet or whatever it is in The Joker Steam Roller set. Nightwing is neat alright but we’re basically buying a $20 set for about $5 value. It’s too bad they have to put Batman in every set, this could have been a cool $6.99 set – or even $11.99 with just fewer parts. But it’s a Batman set so I bought it. That gets it an extra two points, but I’m only giving it 5 total. You’re probably better off just buying the minifigures on ebay or something. Let me know in the comments if you want to see the review score in bold or at the top of the review. I like getting the reader (hypothetical reader) to read to see it other than just quantifying it from the get go.
Check the price on Amazon.