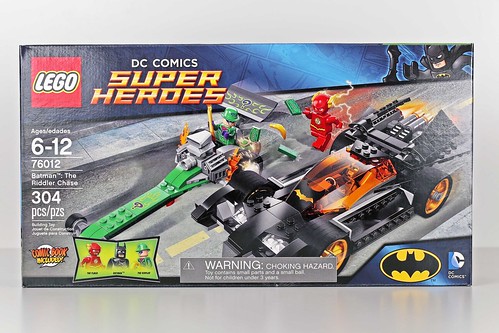 Here we have another of the most recent wave of Batman sets, The Riddler Chase, the highlights being most likely the first Flash minifigure, a new Riddler, and a new mostly gray Batman, though he looks a lot like all the other Batman figures.

Other than the figures though, the Riddler’s dragster is quite flimsy and unless you are really into the nondescript black Bat vehicles – which Lego thinks you really should be – the Bat car won’t do much for you either.

I’m not going to call this a Batmobile, I don’t think it has enough features to be worthy of that name. The canopy/windshield/cockpit does not raise up, it has to be taken all the way off to put Batman behind the steering wheel. Like many Bat vehicles, Batman cannot sit upright or his cowl will prevent the cockpit from closing all the way. Behind him is a tail/back of the car and it does rise up to reveal some missiles. The wheels and tires that come with the vehicles are pretty different, but other than that, neither one is much to look at. 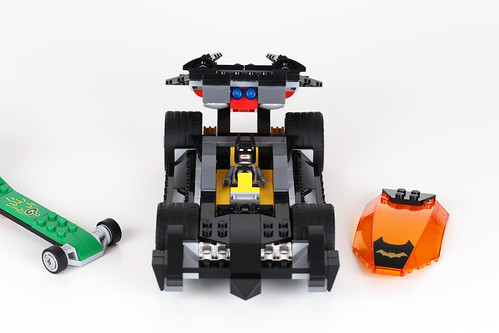 Overall, I can’t rate this set very highly. I think I’ll give it a 6 because Batman sets get an automatic plus 2 on BrickKnight, but this is probably the least worthy set. It’s really a 4, which is the “buy only if it’s on a big clearance sale price” rating.