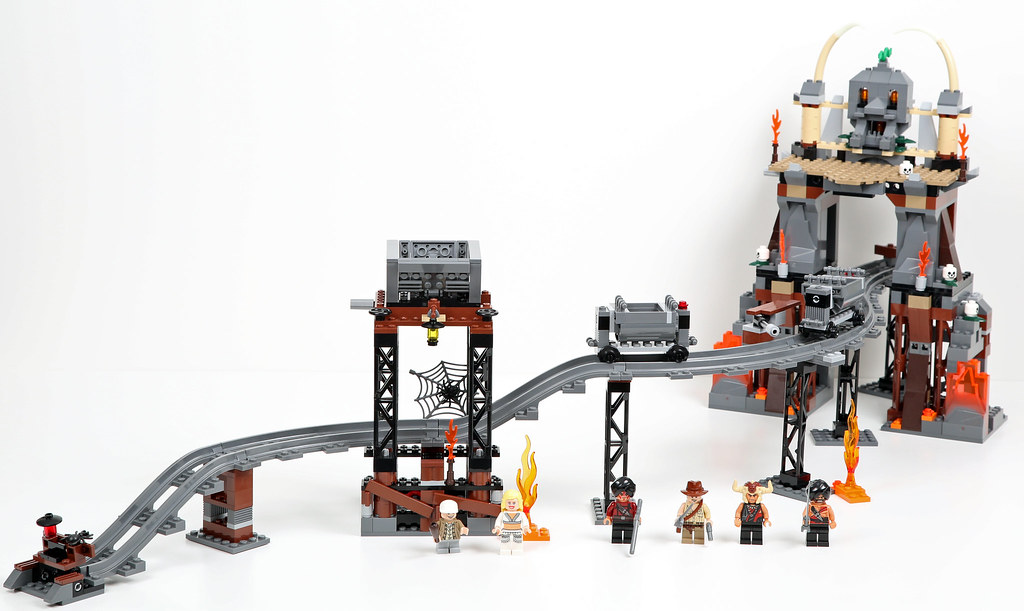 Look at that beauty- and head over to Flickr to see it bigger. Is it possible for a set based on a scene from a movie to be better than the movie? If it is, this set leads the way. While it’s not perfect, Temple of Doom is far, far from perfect. Again I’m using the “Classic” moniker on a set that’s from 2009, but the movie is a classic even if it’s not. You can’t go straight from Raiders of the Lost Ark to The Last Crusade, you need a buffer.

You get Indy, Willie Scott and Short Round, to be chased and ritually sacrificed by Mola Ram and his two henchmen. Notice the tiny Lego head on ‘s headdress – a nice touch, it’s a skull in the film. Willie has her scream face, basically the thing she does for the whole movie “OHH, INDYYYYYYYY.” I find the constant whining and screaming tiresome, but Spielberg ended up marrying her. Maybe it was just acting?

Even cooler, Indy is missing his sleeve just like in the movie. 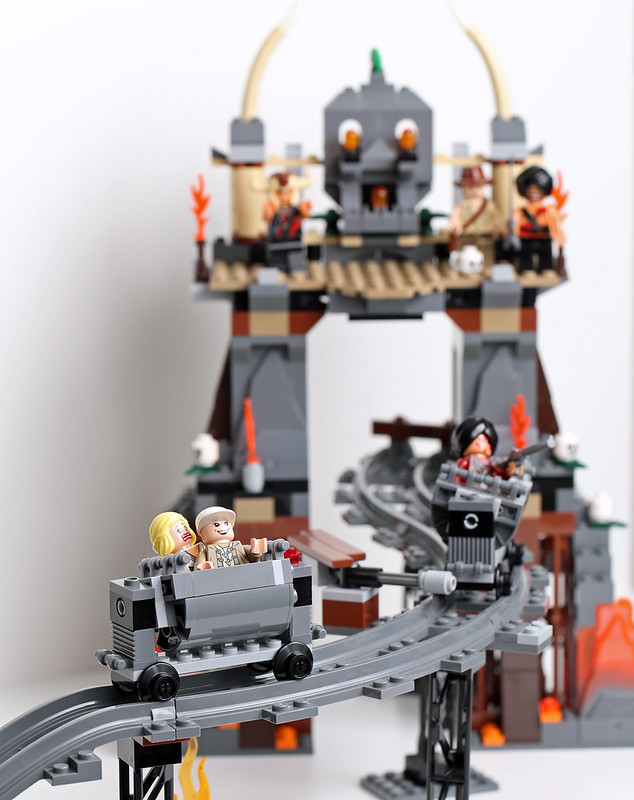 So the set comprises the minifigures and the “temple” along with the mine car track. The layout isn’t exactly faithful to the movie but I don’t think that would be exactly possible, and it’s such an iconic scene/set that it translates regardless. 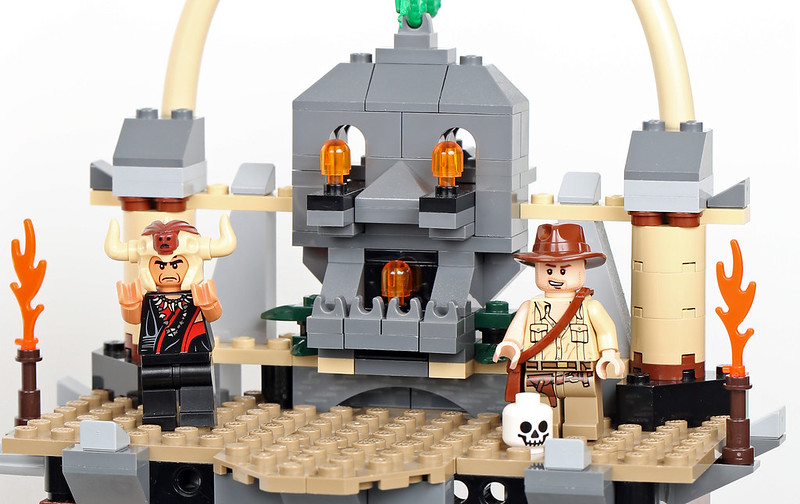 Here we’ve got Mola all ready for the sacrifice or whatever ritual he was performing. I know it involves tearing Indy’s heart out – literally. That’s not a feature included here. Everybody smile! 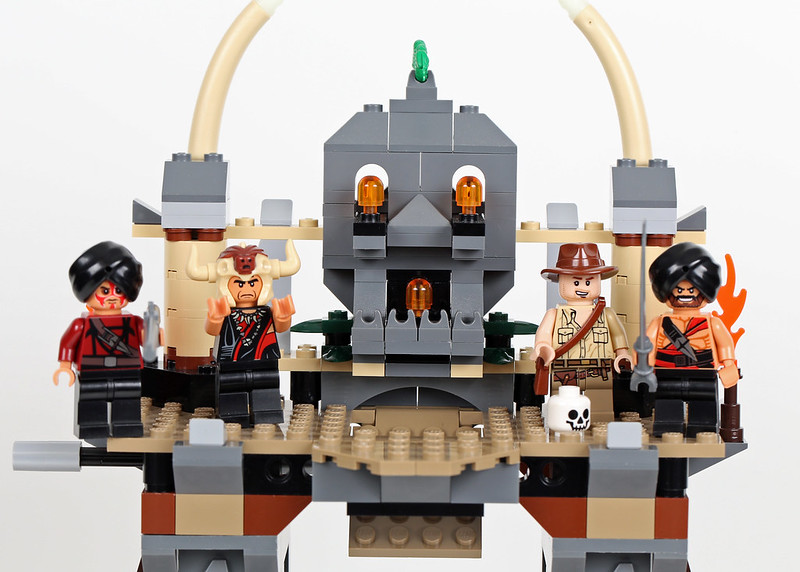 The glowing skull stones move forward and the trap door opens in the floor Lego cage and pulley system not included. 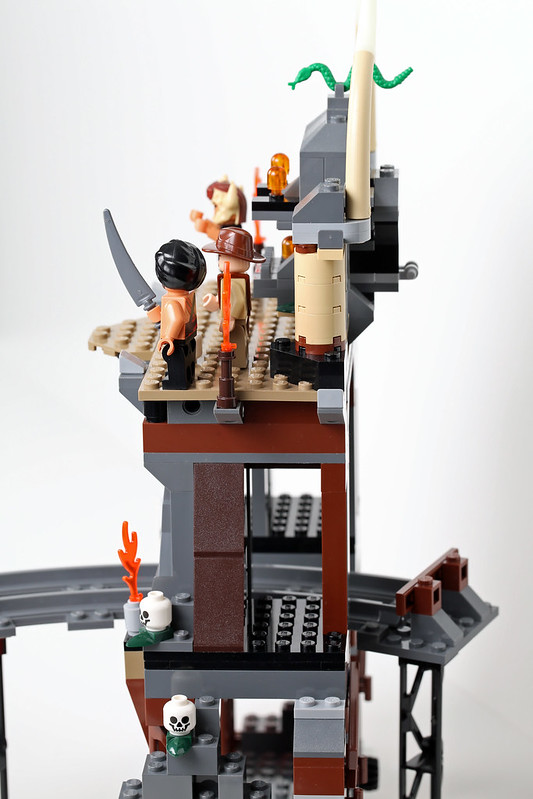 The temple is fairly two dimensional. At the bottom there is a chopping sword, I’m not sure why, along with some mining equipment and jewels. 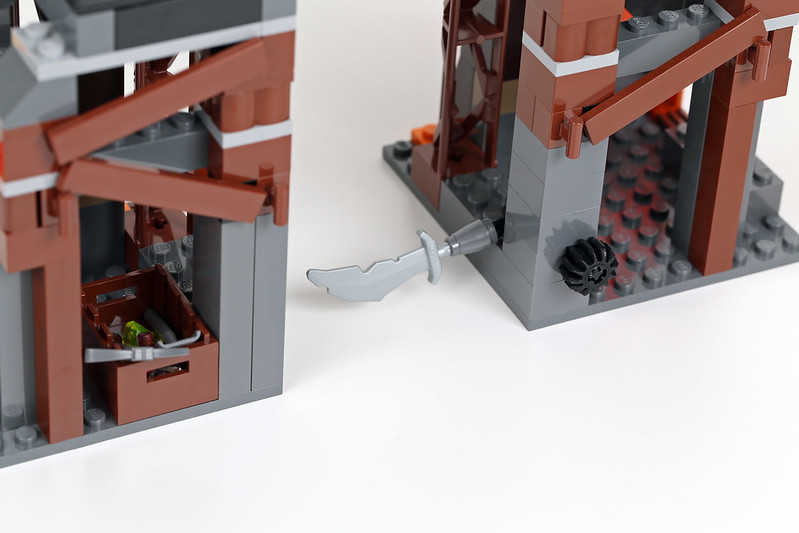 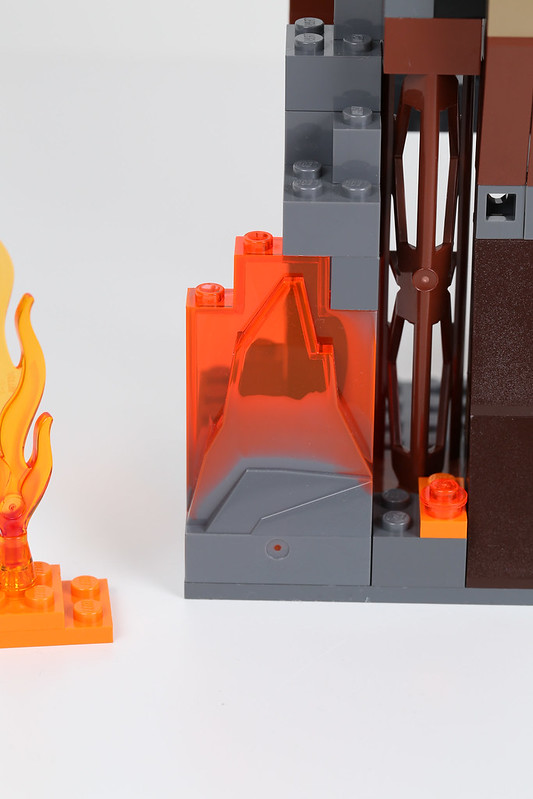 The “fire rock brick” is a fairly rare element in the set. Pretty cool too. 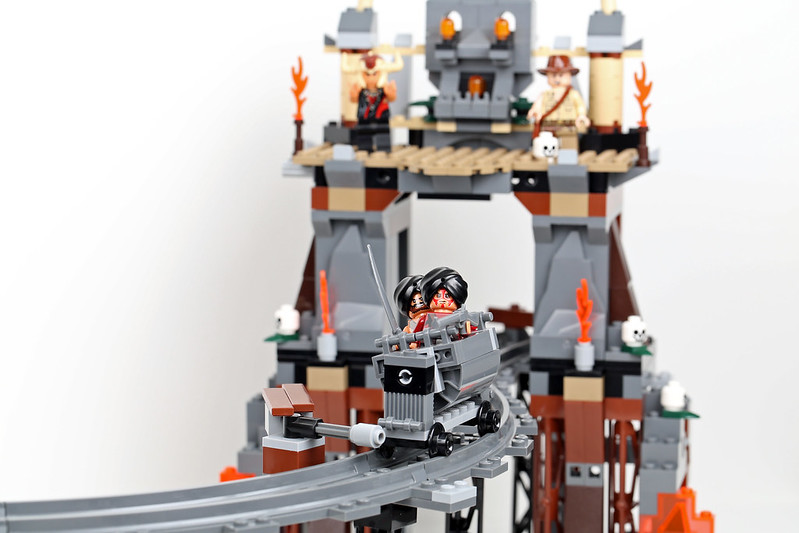 When it’s time to escape or just joyride around, hop into the mining car. 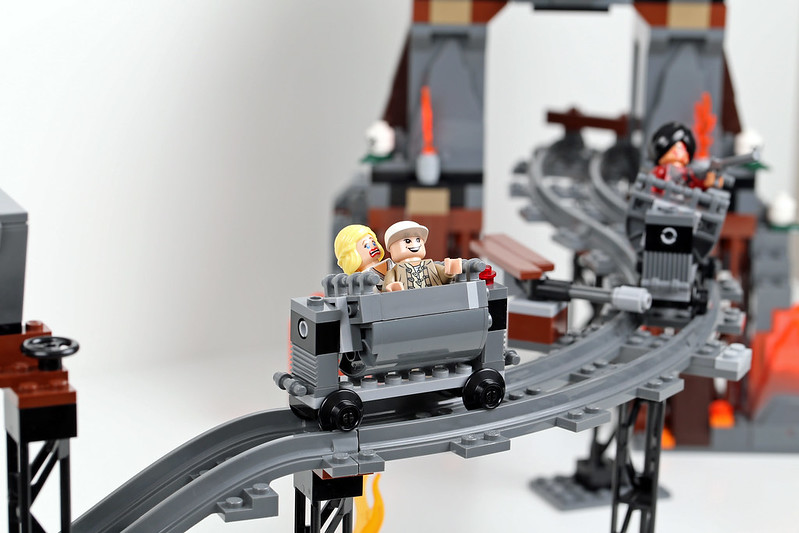 Willie Scott is still screaming. Short Round is still stereotyping. 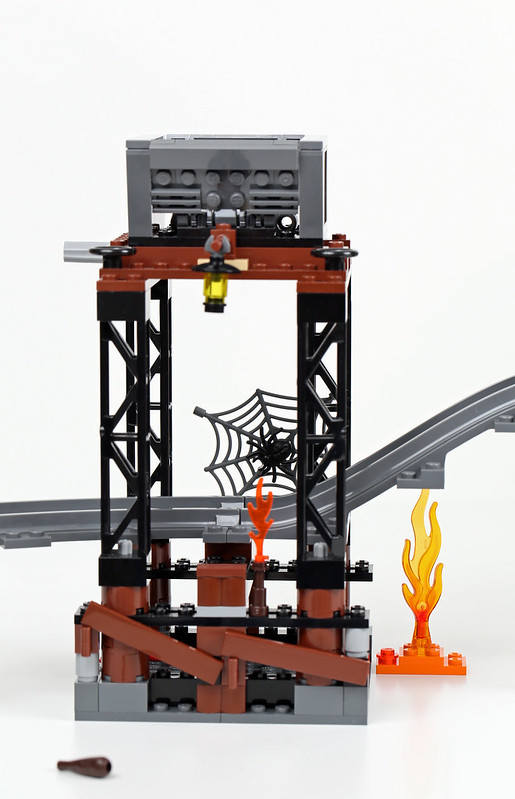 The tracks pass through a second structure with rocks in the top (I think this is a rock hopper) that can be dumped into a mining car below. Not actual rocks of course. 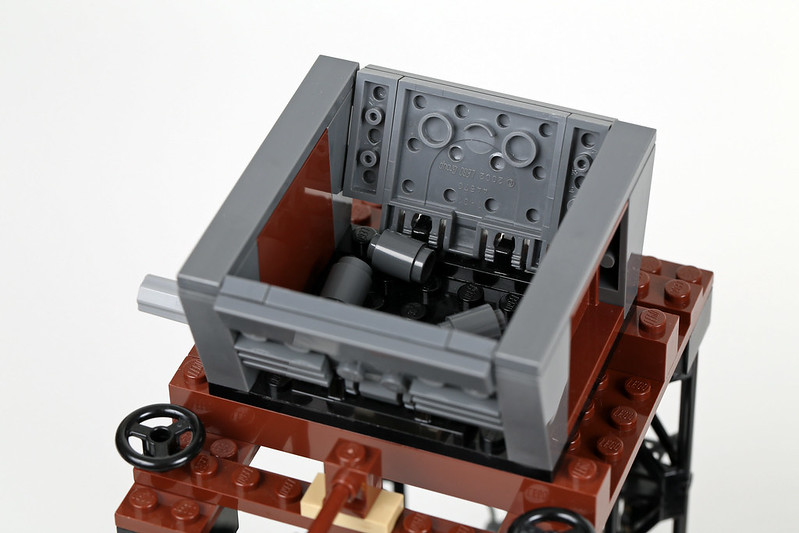 This is obviously a cause for great concern from Willie Scott. 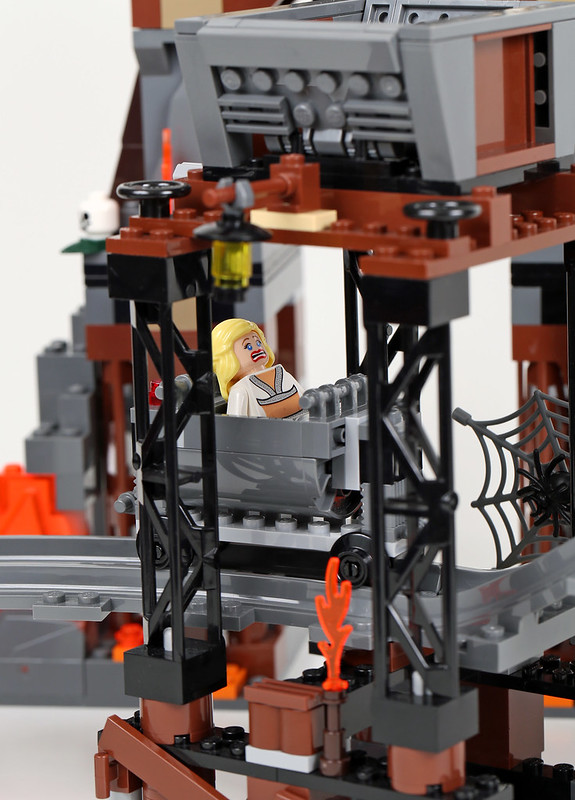 But in the end, we know it all turns out ok. Mostly. 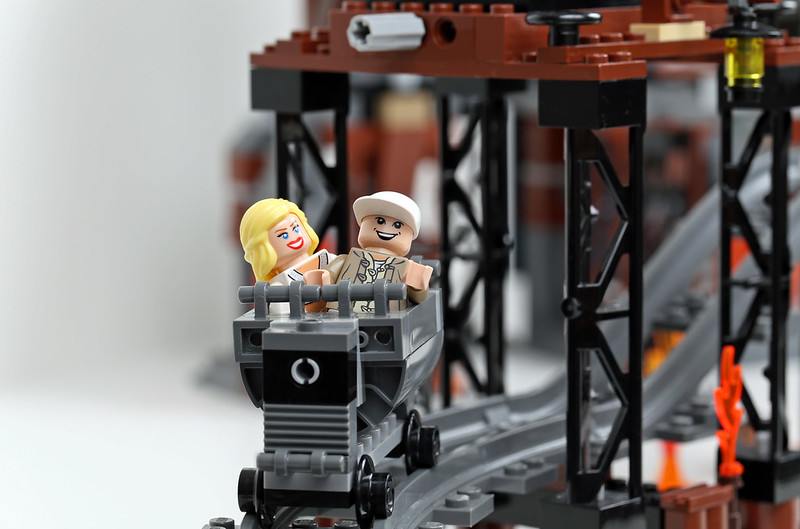 This is a great set because it seems to really capture the scenes from the movie on a big scale. It has height and width even though it doesn’t have a lot of pieces. Let’s remember it’s based on a movie where 3 people survive by jumping out of a flying plane into a life raft. Of course, one of them happens to be Indiana Jones.