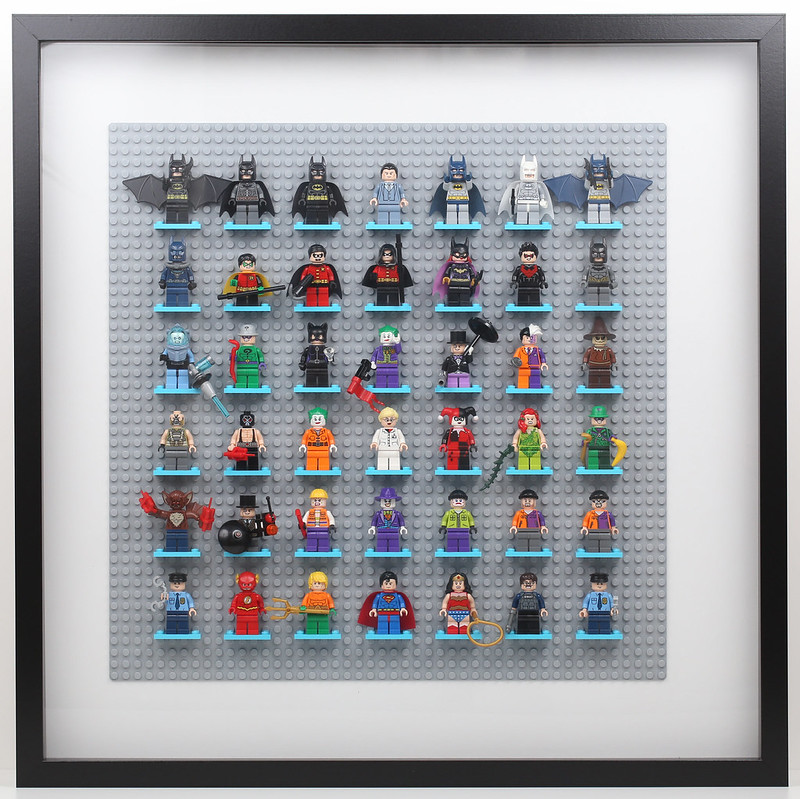 When I first posted about making a Lego Minifigure display I hadn’t gotten the last set I needed (The Riddler Chase) to fill it out. But now, as you can see above, it is complete. It contains every Lego DC Superheroes Minifigure (except Lex Luthor) that has been released in the DC Superheroes line.* Obviously some duplicates like Black Suit Batman and Poison Ivy have been left out. So I thought I’d revisit it and post a better picture. You can see the original on Flickr and zoom in nice and close. Having done this, it’s time to take the some of the figures out. I need them to post set reviews – and this brings us to the biggest problem with the Ikea Ribba frame as a Lego minifigure display – it’s pretty tedious to move figures in and out. But, it’s by far the best, nicest looking, cost convenient way there is right now. I just wish I had three or four of them for all the other figures I want to display. And some different colored baseplates for the background. Particularly a dark green for my Lord of the Rings figures.

*Ok, I really need to qualify that statement. The display contains all of the Batman (and Justice League) figures aside from Lex Luthor and duplicates. Not included in the display are the Superman figures from the Superman movie sets. OR the Joker and Batman figures from 76023 The Tumbler. Because even if I did have those two, they’d be behind bulletproof glass.