Even though there is a Lego store in our local mall – (Northshore Mall in Peabody, MA), ever since Lego put an end to Grab Bags I seldom go there. Even less frequently do I buy anything, especially now that they don’t even send out a 10% off coupon every quarter. Today was an exception however, as I recently went to Ikea and bough a Ribba frame and am going to attempt to make a minifigure display. So I needed a big gray baseplate – which I have been wanting for a long time anyway. They had quite a few new things – I saw the Tumbler in person for the first time and it is definitely bigger than I thought it would be, even though I’d previously looked at the measurements. They also had the new Lego Fusion sets, which seem like a good way to pay even more per piece. They also had a damaged box Batcave for 10% – whoa, easy there Lego. But they did have new items on/in the Pick A Brick wall, including horses! So I figured since horses are usually expensive through the online PAB, it was worth getting a large cup, which is now $15.99, up a dollar from about a year ago. (And I just checked, brown horses are going for $5 each online through Lego, but are currently unavailable). I was able to fit 9 horses in the cup, and I probably could have gotten another one or two in but bought some other various pieces, including some bright blue Friends pieces just for the heck of it. They also had red chairs, and I love buying Lego chairs so I got some of those as well. You can try to pick out what else I got in the photo below. The moral of the story though is that I wish they had never gotten rid of grab bags, it was the best way to get various pieces and good various pieces at that. The Classic Spaceman promotion is going on right now, I didn’t ask if they had any left, but I would have needed to spend $70 more to get a mninifigure, which is not worth it. 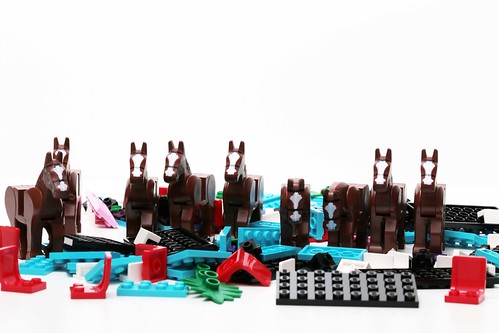 I just noticed the Lego horses have no personality from the front.